The current restoration of the Parthenon [1] on the Athenian Acropolis has been ongoing for many years now. This week, the go-ahead has been given by the Central Archaeological Council for works to proceed on the West Pediment.

You can read more about the proposals (in Greek) here [2]. 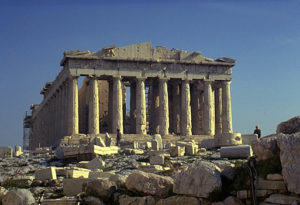 The West end of the Parthenon

The Central Archaeological Council (KAS) approved on Wednesday two projects for the restoration of the upright marble slabs and background wall of the drum which form part of Parthenon’s western pediment.

According to the researchers who presented the two studies, the work involves rescue interventions aimed at dealing with the problems found by restorers in that section of the pediment – mainly cracks formed by various causes. In the future, the studies could be used to evaluate whether it would be useful to add material in place of the two missing slabs, they said.

The process which will be followed will involve removing the oxidized iron parts (from the intervention of Nikolaos Balanos in the early 20th century), completing the structural restoration of each architectural part and systematically conserving the surfaces of the ancient marbles. The crew will also partially dismantle the wall and supplement it with stone plinths where needed to ensure its structural integrity.