Following their decision to loan one of the Parthenon Sculptures to Russia [1], The British Museum is now experiencing a lot of difficulty in obtaining a loan of a sculpture from Greece.

Previously, the British Museum had a relatively close museum with the Museum of Cycladic Art, a privately run institution in Athens. Now though, it appears that in retaliation for their behaviour with the loan to Russia, it is going to be more difficult for them to obtain temporary loans from Greece in the future. 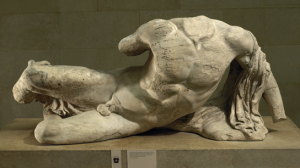 Part of the Parthenon Marbles, the British Museum plans to loan the river-god Ilissos to the Hermitage in St Petersburg

From:
The Art Newspaper [3]

Greece baulks on art loan after Parthenon Marbles row
British Museum still waiting to hear on its request for a sculpture from Athens
By Martin Bailey. Web only
Published online: 06 January 2015

The British Museum’s decision to send a piece of the Parthenon marbles to Russia has delayed a loan from Greece of a key antiquity for a forthcoming exhibition on classical sculpture. A British Museum spokeswoman confirmed that “we have requested to borrow” an important work from the Museum of Cycladic Art in Athens for the show, “Defining Beauty: the Body in ancient Greek Art” (6 March-5 July). She says the Greek museum has not yet decided on the loan request.

The British Museum currently has 24 items on loan to the Museum of Cycladic Art, and curatorial relations between them are friendly. The fact that the loan has not been formally agreed is because of tensions with the Greek government after one of the Parthenon Marbles, the headless figure of the river god Ilissos, was sent to the State Hermitage Museum in St Petersburg in December. Antonis Samaras, the Greek prime minister, described the loan, the first time one of the sculptures has left Britain since they were controversially taken from the Parthenon by Lord Elgin in the early 19th century, as “an affront to the Greek people”.

Meanwhile, the historic agreement has already sparked a spate of interest from other borrowers and the British Museum is considering three serious requests for loans from the set, with further bids expected (The Art Newspaper, January 2015, p3).

Although it may still be possible to finalise the loan from the Cycladic art museum, time is now very tight. For the British Museum show, some of the Parthenon Marbles will for the first time be moved from their permanent display to the temporary exhibition gallery, including the pediment sculptures of Ilissos (which will be returning from Russia), Iris and Dionysos. Other possible loans had been raised last year by the British Museum, but did not lead to formal requests. Further details about the exhibition are due to be released later this week.

Update: The British Museum today, 8 January, announced details of “Defining Beauty: the Body in ancient Greek Art”. Visitors will be greeted by the recently discovered bronze figure of a nude athlete found on the island of Losinj in Croatia. Other key loans include the Belvedere Torso from the Vatican Museums, which will be shown alongside a Michelangelo drawing of Adam in the British Museum collection, which it inspired. Six of the Parthenon Marbles, including Ilissos (which will be returning from the Hermitage), will also be in the show.

The British Museum’s decision in December to loan a piece of the infamous Parthenon Marbles to Russia’s major museum, Hermitage, in St. Petersburg, has fueled Greece’s anger regarding the British stance on the issue of their return, with Greek Prime Minister Antonis Samaras characterizing the decision as “an affront to the Greek people.” A few days later, the British Museum requested the loan of a key Greek antiquity for its forthcoming exhibition on classical sculpture, “Defining beauty: The body in Ancient Greece,” which will be hosted from March 26 until July 5, although the Greek side has significantly delayed to give an answer on the request.

As pressed in The Art Newspaper, a British Museum spokeswoman confirmed that a loan request has been made for an important work from the Museum of Cycladic Art in Athens. The relations between the two museums are, allegedly, friendly and as of now, some 24 items are on loan to the Museum of Cycladic Art. Although, even if it seems impossible that the loan will proceed, time is now very tight for the British Museum’s exhibition, for which some of the Parthenon Marbles will be moved, for the first time, from their regular exhibition place to the four-month temporary exhibition area. Among them are the pediment sculptures of river god Ilissos, Iris and Dionysos.

Earlier today, the British Museum announced details of the upcoming exhibition: “Experience the brilliance and diversity of ancient Greek art in this major exhibition focusing on the human body. For centuries, the ancient Greeks experimented with ways of representing the human body, both as an object of beauty and a bearer of meaning. The remarkable works of art in the exhibition, range from abstract simplicity of prehistoric figurines to breathtaking realism in the age of Alexander the Great. These works continued to inspire artists for hundreds of years, giving form to thought and shaping our own perceptions of ourselves.”